Chelsea predictions at Wolves: Many goals, even if Antonio Rudiger returns by The Pride of London Staff
Chelsea: Marcos Alonso and Willian are exhibits A and B for the 3-4-3 by George Perry
Next1 of 3Prev post
Use your ← → (arrows) to browse 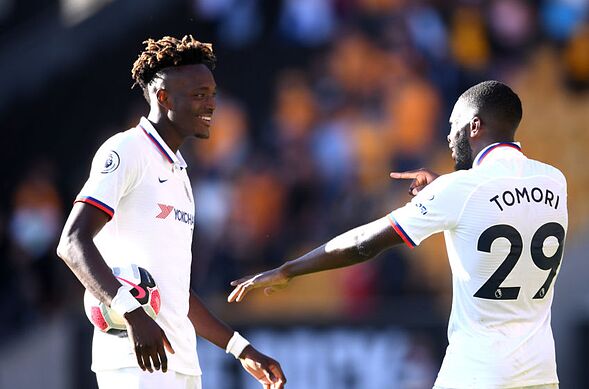 Chelsea fans endured a painful two weeks of international break, but were rewarded upon the Premier League’s return. Five goals from the Cobham grads gave Blues a memorable win.

Super Frank Lampard went total Antonio Conte and threw out a three-at-the-back defence in the early part of the season. It made for a boring first 25 minutes, then absolute joy erupted for all Chelsea fans.

In the first half Kepa Arrizabalaga wasn’t asked to do anything, mostly because Wolves struggled to create anything against the Blues’ defense.

Wolves converted a second half corner by sending a header right on target, low to Arrizabalaga’s left. He should have saved it, or at least done something better than pushing it towards Tammy Abraham, who was minding the near post. The ball bounced off Abraham’s hand and back into the net: an Abraham own-goal that Arrizabalaga was responsible for. For the second goal, Matt Doherty blasted a shot right at him, which he spilled as a rebound that Patrick Cutrone popped in the net.

Rudiger played very solidly for the first half before coming off as a precaution at halftime. He looked physical and comfortable in the three at the back formation, and had a very nice flick on a corner routine that resulted in another corner. Granted, the first corner would have troubled the keeper if Rudiger had not deflected it, but the intent and move was spot on.

Kurt Zouma came in for the second half and had some necessary clearances and decent defensive play. Between the two of them, they averaged 7.5

Andreas Christensen is so very smooth on the ball, a poor man’s Aymeric Laporte, if you will. He is not only silky in possession, but on defence. Diogo Jota had a chance early and Christensen smoothly cleaned it up and cleared the ball. The Blues’ most consistent defender throughout the day, with and without the ball at his feet.

The youngest of the center backs was outstanding at Molineux, highlighted by his wonder goal in the first half that caught the Wolves’ keeper completely off guard. He also played a hand in the second goal when he hit a pass in to Mason Mount, who nudged it over to Abraham to finish. His play has been outstanding and his confidence is on full display.

Next: Wingbacks and midfielders: Cesar Azpilicueta and Mateo Kovacic in utmost reliable form
Next1 of 3Prev post
Use your ← → (arrows) to browse
Load Comments
Event Tickets
Powered by StubHub