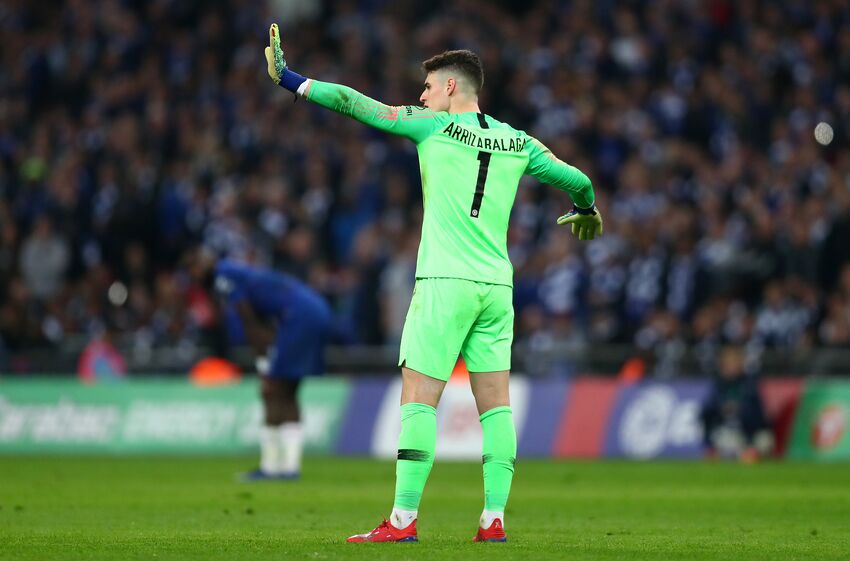 LONDON, ENGLAND - FEBRUARY 24: Kepa Arrizabalaga of Chelsea reacts as he refuses to be substituted during the Carabao Cup Final between Chelsea and Manchester City at Wembley Stadium on February 24, 2019 in London, England. (Photo by Clive Rose/Getty Images)

Chelsea: Sense of the pointlessness of out possessing Manchester City by Travis Tyler
Would Chelsea be better, worse or just different if Eden Hazard stayed? by Hugo Amaya

Kepa Arrizabalaga has had an increasingly rough go of it at Chelsea in recent weeks. He is not a lost cause, but some change is needed.

Any conversation about keepers needs to be predicated on the uniqueness of the position and the simple fact that many do not understand them in the same way as outfielders. For every concern about a goal conceded or a save missed, equal consideration needs to be given to the situation a defense leaves a keeper in. Furthermore, keepers on good teams are almost always destined to be statistically “worse” than their counter parts on lower quality teams simply because they do not get tested as much.

Those cannot be excuses forever and Kepa Arrizabalaga’s benefit of the doubt is eroding. He is tied last for punches and has the fifth most goals conceded in the Premier League. He also ranks at the very bottom for saves made and sits in the middle of the league for high claims. Whatever excuses can be made for him can still be made, but on the same note he is not really quieting noise around him either.

Arrizabalaga was a last minute buy when Thibaut Courtois went AWOL and left the Blues with no other choice. Statistically, he was not the clear standout in any category and time has more or less shown just that. It is worth keeping in mind that keepers, by their nature, are different. And because of that, Frank Lampard and company cannot count Arrizabalaga as a lost cause yet. But something needs to change sooner rather than later to stop the bleeding.

Arrizabalaga is only 25, which for an outfielder would be approaching their prime years but for a keeper is quite early. Certain traits, such as reflexes, show early in a keeper’s career. The likes of decision making, physical abilities, and technique? Those come later. Keepers develop slower overall and tend to keep those skills for longer than an outfielder. Thus, Arrizabalaga is nowhere close to his prime years and can still be molded.

Related Story: Chelsea: Mason Mount brings the 4-3-3 off the page and into life

Perhaps more than any other position, a change in coaches can make all the difference for keepers. That is why Lampard has been pushing for Shay Given to join him at the Blues. It is also why Courtois was able to force Petr Cech’s coach, Christophe Lollichon into the academy where he remains to this day.

So there is a strong argument that bringing in a new keeper coach, be it Given or reinstating Lollichon (which can be assumed to be a nonstarter given he did not return to the first team when Courtois left), could solve most of Arrizabalaga’s issues. Henrique Hilario was made the keeper coach as part of the push for former players in the staff this past summer, but clearly it has not worked out as well as the other, similar appointments.

A new keeper coach could provide Arrizabalaga with the drills and instruction needed to improve his decision making. With a keeper, a new coach could make that much of a difference.

Next: Chelsea: Sense of the pointlessness of out possessing Manchester City

Chelsea paid a lot to bring Arrizabalaga in, even if they had no other choice. Other choices are out there and could improve the Blues right away, but it is too early to give up on the Spaniard just yet. There is still time to save him, but a change will need to be made to ensure it happens before it is too late.