WOLVERHAMPTON, ENGLAND - SEPTEMBER 14: Willian of Chelsea in action during the Premier League match between Wolverhampton Wanderers and Chelsea FC at Molineux on September 14, 2019 in Wolverhampton, United Kingdom. (Photo by Clive Mason/Getty Images)

Chelsea’s games of the season (for now): Hat tricks, big wins and wild draws by The Pride of London Staff
Chelsea will be in a contract pickle if things continue like this by Travis Tyler

Chelsea’s forwards do not have to defend as much under Frank Lampard as they would under some earlier managers. Pedro and Willian are the most balanced when it comes to tackling and retaining possession, but the Blues have not seen anyone like Oscar since he left.

Pedro made headlines (at least around here he did) for his five tackles against Liverpool in the FA Cup. Pedro has made 147 tackles in the Premier League, third-most among all Chelsea forwards since the 2012/13 season. His tackle success rate of 57% puts him in the middle of the ranking, alongside Diego Costa and Ross Barkley, who have similars rate on far fewer attempts. Pedro, though, is much more balanced in terms of taking possession and losing possession: along with 147 tackles, he has been dispossessed 154 times. Only Willian has a similarly close correspondence between the two stats. Willian has taken the ball 239 times, but given it back 247 times.

The Blues’ top tackling forward in that span, though, was Oscar. In his four and a half seasons at Chelsea, Oscar racked up 287 tackles. His tackle success rate of 65% is the highest of any forward with more than 50 attempts.

Oscar was dispossessed 171 times. Eden Hazard, Diego Costa and Willian were the only players to lose possession more times.

Among Chelsea players who won more than 50 tackles or were dispossessed more than 50 times, only Andre Schurrle and Oscar have more tackles than dispossessions since 2012/13. The raw numbers confirm how impressive Oscar’s stats were, as Schurrle only had about one-quarter of Oscar’s tackles.

The data have some interesting revelations about Chelsea’s departed Spanish strikers.

Fernando Torres won the ball back in 75% of his 57 attempted tackles. That is the fourth-highest rate of all forwards since 2012/13. Not all that surprisingly, Alvaro Morata is at the other end of the scale. He was successful in only 21 of his 47 tackle attempts – 47% – the second-lowest. Tammy Abraham is in the bottom spot. 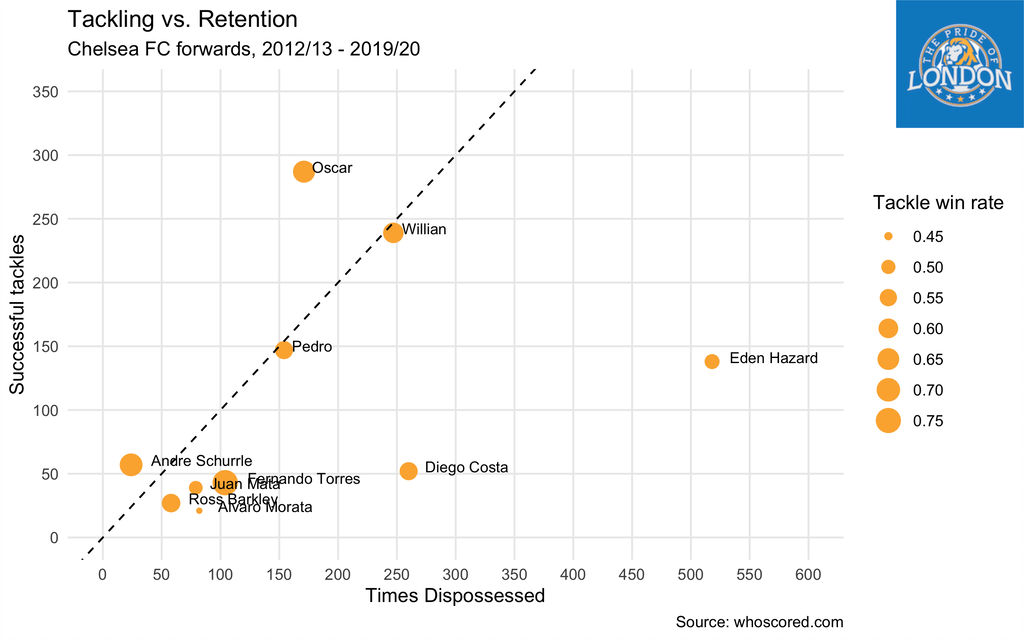 Diego Costa is in the middle of the range for his tackle success rate, but he was dispossessed more than anyone else except for Eden Hazard. And Hazard, for all the talk of him never tracking back and contributing to defence, completed 138 tackles. Only Oscar, Willian and Pedro did more tackling on offence than Hazard in that time.

This season, only Willian and Pedro – the castigated and sometimes excluded senior players – pop over the line. The remaining Blues forwards have all given the ball away more times than they’ve taken it back.

This is one more area in which the young Blues should be learning from the senior players. Willian and Pedro keep finding their way into the regular XI because they bring so much to both sides of the ball. An offence-first, possession-oriented system like Frank Lampard’s needs forwards who can win the ball back. What better way to keep possession and pressure in the opponent’s zone than having players who can win the ball back immediately upon turning it over?

When Callum Hudson-Odoi and Christian Pulisic can defend like Willian and Pedro, then they can be regulars in the side and the conversations about them replacing Willian and Pedro can have some actual heft.

The highest bar, though, is Oscar’s. Mason Mount’s off-the-ball runs and play between the lines is very similar to Oscar’s, but he has yet to add the tackling aspect to his game.

Right now, Chelsea have these duties split amongst the midfielders: N’Golo Kante, Billy Gilmour or Mateo Kovacic to win the ball back; Kovacic to bring it up field; Mount to open up space for other players to bring the ball into the box from offensive possession.

Oscar is one of Chelsea’s most underrated players because he had all of that from the central attacking midfield position.

Next: Chelsea's games of the season (for now): Hat tricks, big wins and wild draws

Credit for this article goes to Twitter follower @CrewtonMcgregor. If you have an idea you’d like us to write about, please tweet it to us. We really need the help to get everyone through the virus interruptus!